Categories:
Archives:
Meta:
January 2023
09/26/20
Ghostly Spirits Rise From the Game Board in Time for Halloween Scares - 25-28mm Scale Phantoms
Filed under: Fantasy, Science Fiction, Pulp, Horror, 25-28 mm, Victorian Science Fiction, Steampunk, Post Apocalypse, Monsters, Undead
Posted by: G R @ 2:12 pm
The end of September is nearly here which means Halloween is just around the corner. It’s time for the ethereal spirits of the dead to rise from their burial places and haunt your characters.
Here are five graveyard ghosties ready to drift about your lonely cemetery, abandoned house, or forgotten battlefield. 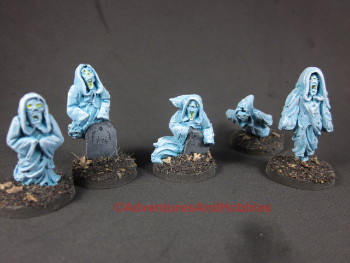 Each spirit sports a tormented visage. Wails of the damned emanate from their distended mouths. 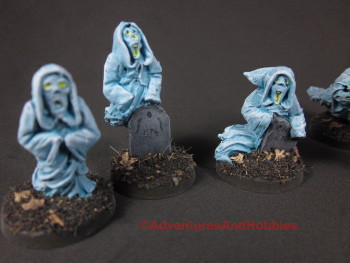 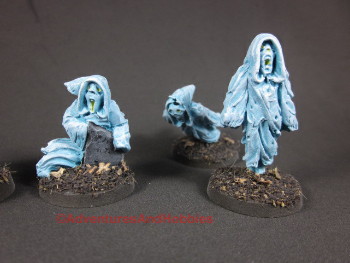 Perhaps they are trying to seek help from the living to right a wrong in their past life. Or maybe they just enjoy causing fear in whomever they encounter. 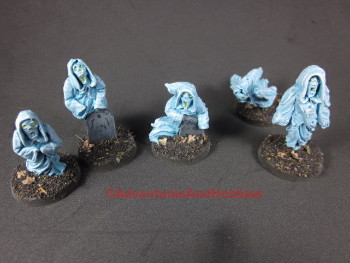 These miniatures are sculpted in the 25-28mm game scale. Ghostly spirits can appear in nearly any style of role-playing game or table top miniatures game. Fantasy, horror, pulp, science fiction, they all can be enlivened by a phantom or two.
Visit my store to see more of my painted game miniatures, including other Halloween Horrors for a special fall game session of terror.
Comments Off
02/11/14
Victorian British Servants with Weapons 25mm Painted Game Miniatures
Filed under: Pulp, Horror, 25-28 mm, Victorian Science Fiction, Steampunk
Posted by: G R @ 10:09 am 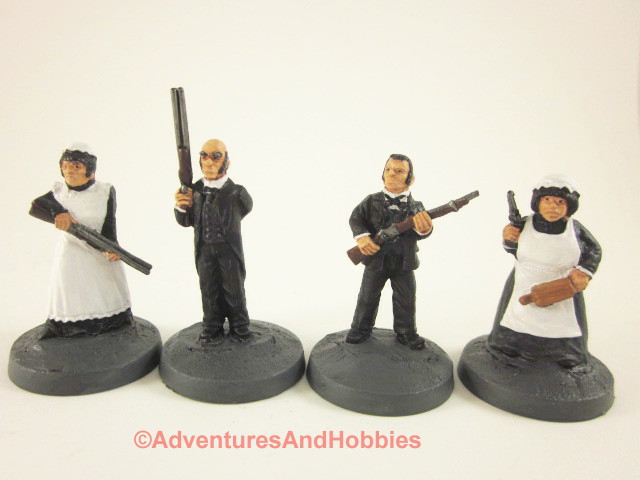 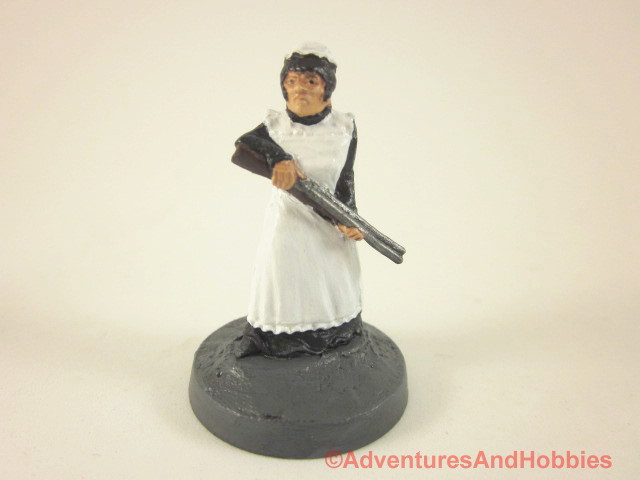 Cloaked in a heavy cape to keep the clinging fog at bay, this young Victorian woman is dressed for the outdoors. But is she prepared for the evil that hides in the swirling darkness on the brick streets? 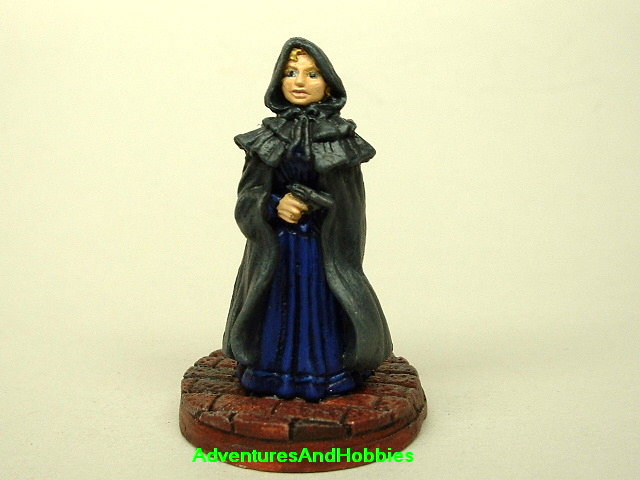 Perhaps so. She carries a small revolver for protection. And her proper upright stance indicates a certain toughness hidden in her young years. 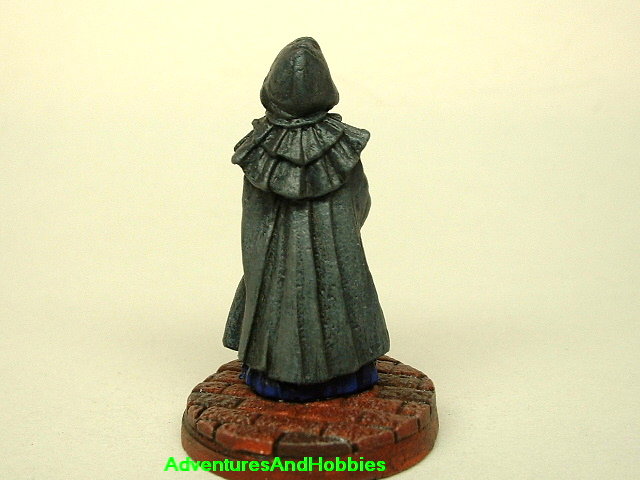 This 25 mm scale figure could be used in various game settings including Victorian Science Fiction, Steampunk, and Call of Cthulhuâ ¢.

Strong winds swirl this aviator’s heavy flying coat as he prepares to fire the machine pistol held in his extended right hand.

His flying uniform is designed to protect him from the rigors of high altitude flight.  The long coat is fur lined, as are his heavy leather gloves.  His goggles sit atop his leather helmet.  In addition, he wears sturdy insulated boots.  He obviously spends a lot of time up in the colder regions of the atmosphere, possibly in his biplane or airship.


This 25 mm game miniature really captures the rough and tumble essence of a pulp aviator.  He would fit in any pulp, steampunk, Victorian Science Fiction, or even Call of Cthulhu adventure campaign. 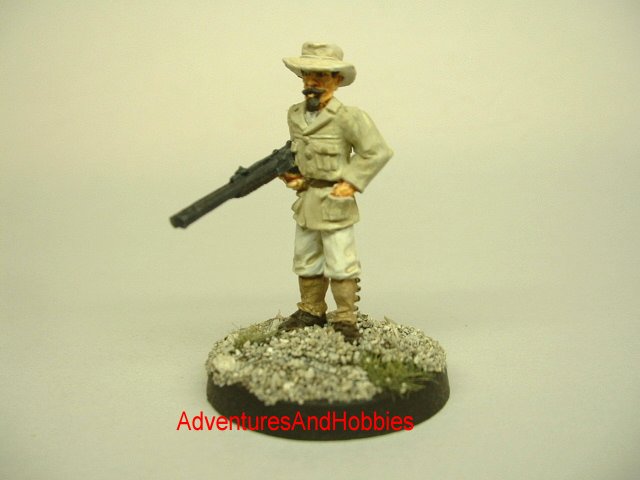 This 25 mm miniature captures Quatermain in his iconic bush “uniform”.  Ready for another day under the hot savannah sun. 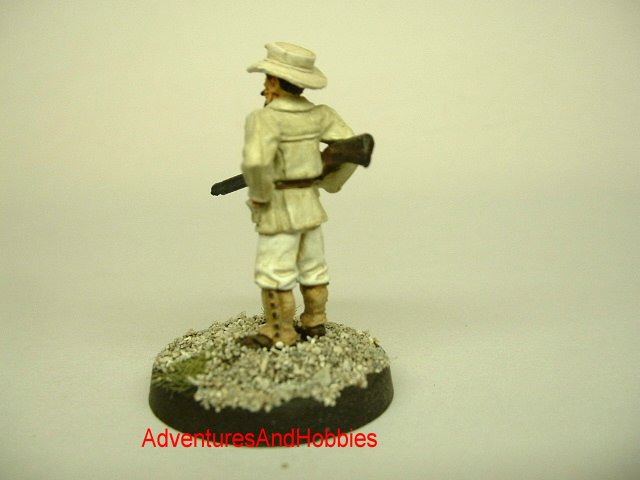 Stiff-backed and unbending, the Baron projects a commanding aura in any
situation.  He is used to having his orders obeyed without discussion,
whether it be on the battlefield or in the social court.

Here the Baron is decked out in his dress uniform.  But the pistol holstered on his right hip is not just for show.  Nor is the saber hanging from his belt.  Both weapons are ready to be brought into a combat situation and used with high proficiency.

This 25 mm miniature would be at home in various game worlds.  In Victorian Science Fiction, the Baron could be the commanding officer of the Imperial German Martian Expeditionary Forces.  Or he could represent the power-hungry mastermind bent on world domination in any pulp action campaign.

Presenting a Victorian Lord and his Lady. Two members of the British upper crust who epitomize the belief that proper upbringing and correct social interaction can win out over any obstacle.

The Lord is dressed in a stately outfit including a long tailed waist jacket. Of course he carries a gold-topped walking cane, which may or may not disguise a hidden sword blade. A freshly cut flower from the estate’s gardens adorns his lapel.

The Lady wears an elegant gown perfect for an evening of entertaining her guests as lady of the manor.


Yes, these two upstanding community leaders are certain that everything is right in their ordered world.  Of course, dark eldar gods, crazed cultists, and criminal masterminds may have different opinions!

Both figures have been mounted on brickwork bases. These miniatures can be useful in a variety of game genres including Victorian Science Fiction and Steampunk. Perhaps they are in fact refined Call of Cthulhu investigators.