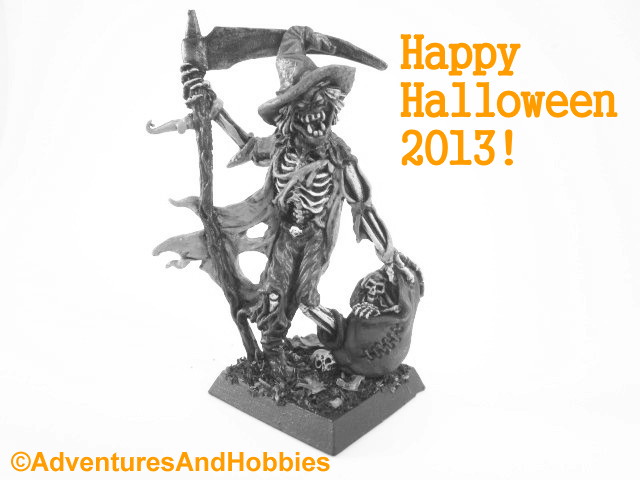 Have a fun and safe Halloween season and watch out for things that go bump in the dark shadows of the autumn  night!

Throughout his long life, this wizard has devoted his time and talent to mastering his arcane arts. Although the extremely long gray beard may suggest that this magic user is getting on in years, do not be fooled that he has lost his spell abilities.

His clothing (robes, cape and tall hat) are done in various shades of blues, possibly indicating his interest in the magical aspects of water, air or cold. Or perhaps all three. 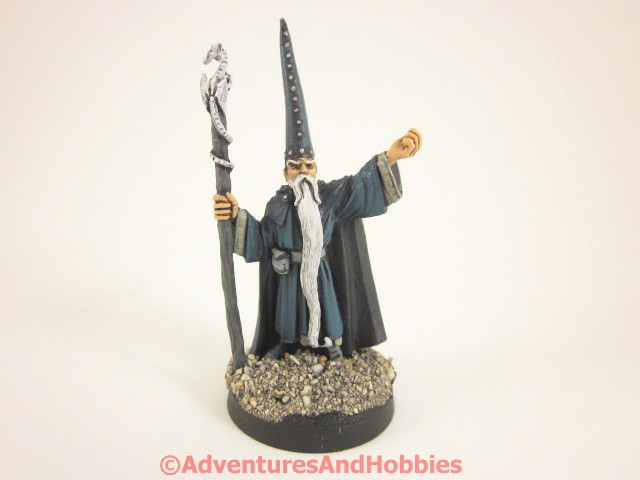 He holds his staff in his right hand and uses it as a foci for some of his spell casting. A small white dragon familiar perches atop the staff. 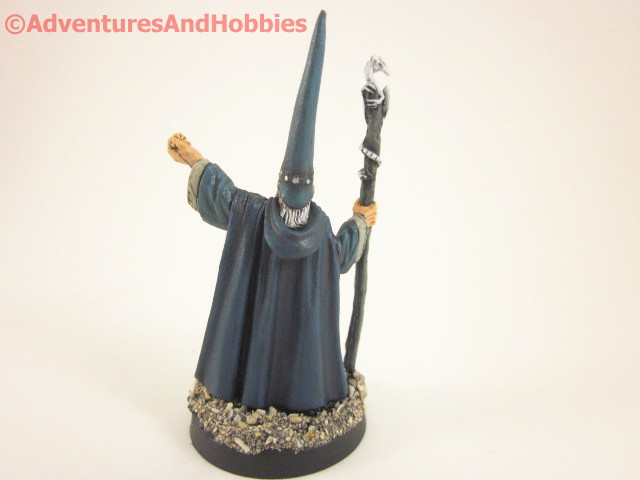 This sculpture nicely captures the wizard’s personality with a strong, determined image in the face. He stands fully upright, no hint that age has weakened him so far. He could easily be viewed as an adviser counseling kings or adventurers in any fantasy world.

Something is slithering about in the dark corners of the laboratory! Soft squishy sounds come from the shadows.

What has our little mad scientist been creating under the full moon in time for Halloween?  Some “trick” for the local children to discover when they come trick or treating at the doctor’s door?

Tentacled terrors to haunt the dreams of any sane person, that is for certain. Experimental Life Form 1 exhibits signs of high intelligence, just not necessarily anything that conforms to human standards. Multiple eye pods  move about in seemingly uncoordinated ways, looking in different directions at the same time. Tentacles grasp at the air, seeking to make contact. 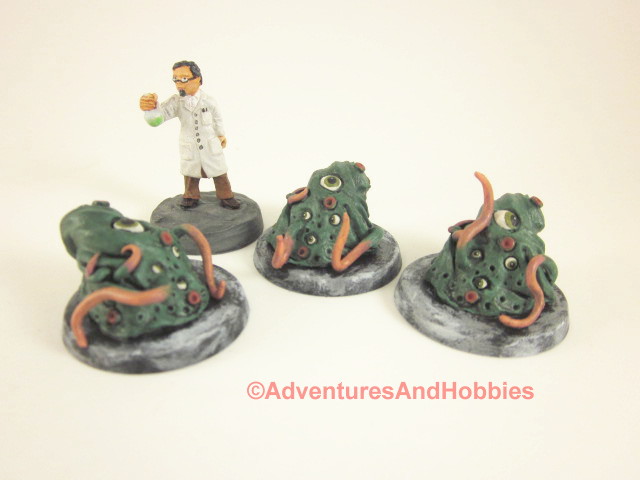 Experimental Life Form 2 is a bit less sophisticated, but no less alien. These creatures lack the obvious eyes of the first abomination, but seem to move in response to some other stimuli, possibly body warmth. Tentacles stretch out, touching everything in the vicinity, using a high sense of touch to explore their new world. Their skin erupts in oozing sores, filling the lab with objectionable stench. The good doctor has thoughtfully provided a fresh zombie as a treat for his new pets. 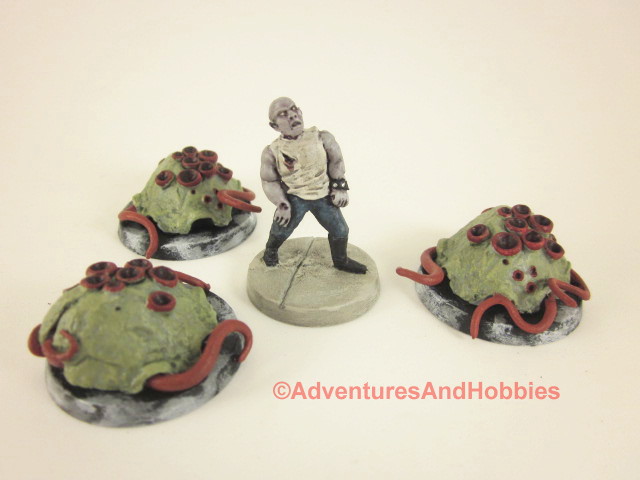 These creatures could pop up in any science fiction, horror or fantasy game world.  The mad scientist and zombie figures in the photos are 25mm scale for size comparison. But the critters also could be used as very large monsters with 15mm scale miniatures.

Lots or rippling muscles, minimal armor, and a sturdy sword — everything a classic barbarian hero needs to fight his way to sit on a kingdom’s throne! Or to defend his kingdom from the invading dark hordes of evil Hellspawn! 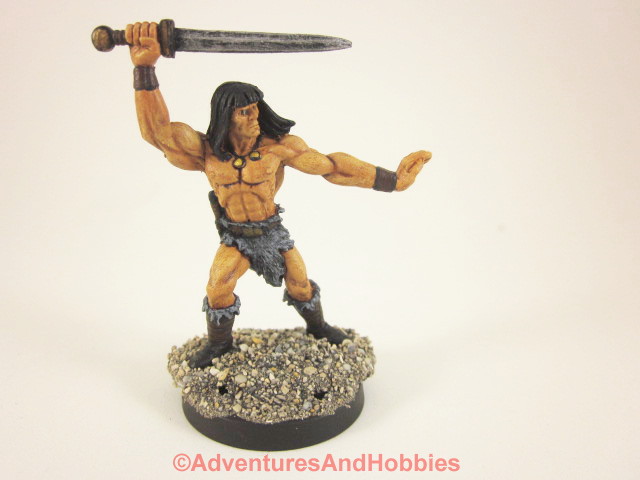 This tall warrior wields a longsword in combat and relies on his reflexes and strength, rather than cumbersome armor, to defeat his foes in battle. His clothing and boots are fashioned from simple animal skins. 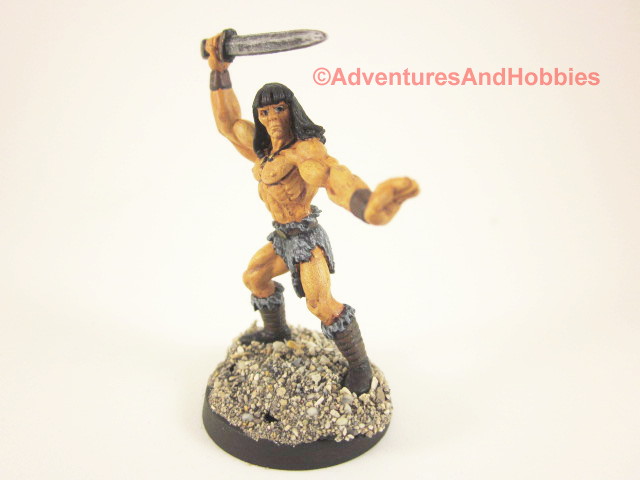 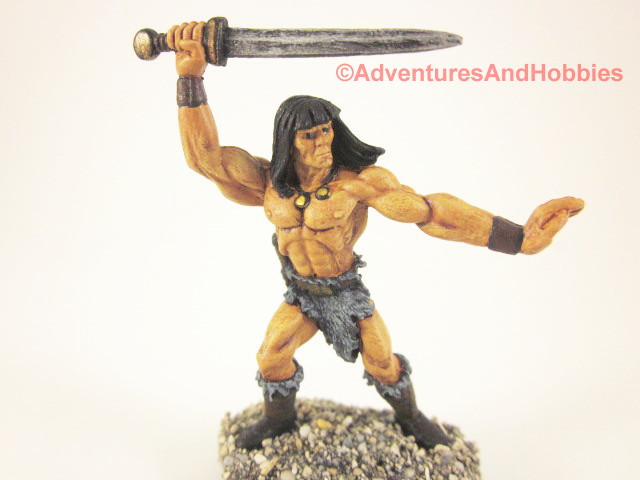 He also carries a dagger in the sheath at his hip. 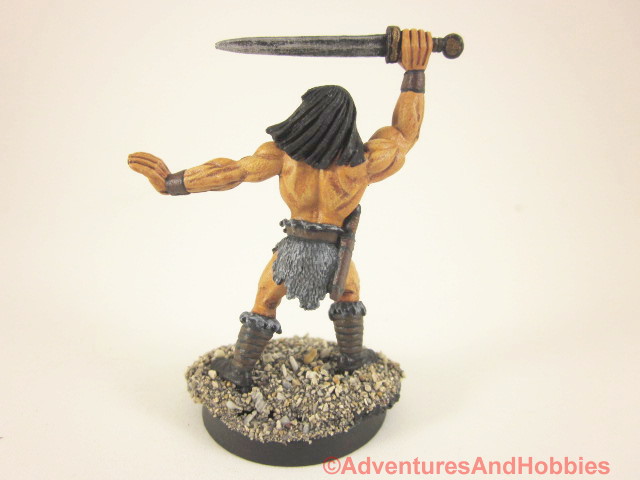 The pose is a bit dramatic, yet seems to fit well with the classic character. He could easily appear in most fantasy worlds.